A Night at the Oscars 2018 - Ratcliffe College

The Media Department, once more, concluded its academic year with an extravaganza of a show, celebrating the frankly remarkable talents of our young filmmakers and print experts. The annual ‘A Night at the Oscars’ enlisted its largest independent judging panel to date to pore over the music videos, short films, and advertising campaigns, produced by GCSE and A Level students. This then culminated in a celebration of their talents in the suitably over-stated evening, hosted by Mrs Bennett, complete with red carpet, life-size Oscars statues and a genuinely gigantic cinema screen. Mrs Bennett was ably supported behind the scenes by Miss Beki Doig, who produced the stunning photography you see accompanying this article, and Media Technician, Mr Daniel Smith, (truly the hardest working editor I know!) who worked alongside David Ricks, to provide visuals, sound and lighting. This was in addition to the sterling efforts of the Maintenance, Housekeeping and Catering teams, who worked incredibly hard to transform the Theatre into a glitzy venue, fit for Hollywood. 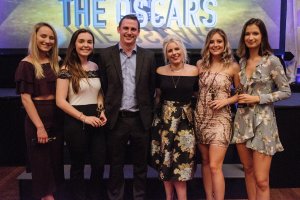 The big winner of the night was Mirrored, a short documentary by Olivia Back, Isabelle Duckett, Hannah Grinham and Alexandra Offer in Year 13, exploring the challenges of body image facing young women, in particular, today. This compelling account of both the modelling and cosmetic surgery industries will now go on to be showcased at the College’s Exhibition Day and will form part of the school’s PSHCE programme, in a bid to further educate young people about perceptions of our bodies. This is an outstanding achievement, of which the girls should be justifiably proud.  A completely different, but equally impressive, short film on the evening, and winner of Best Short Film, was Why Paranormal?, by Samuel Ashberry, Poppy Beech-Pickering, Darcie Naylor and Callista Tsatsa in Year 13. This thoroughly creepy short documentary delved into the myriad mysteries of the paranormal to explore its attraction to ghost-hunters the world over. 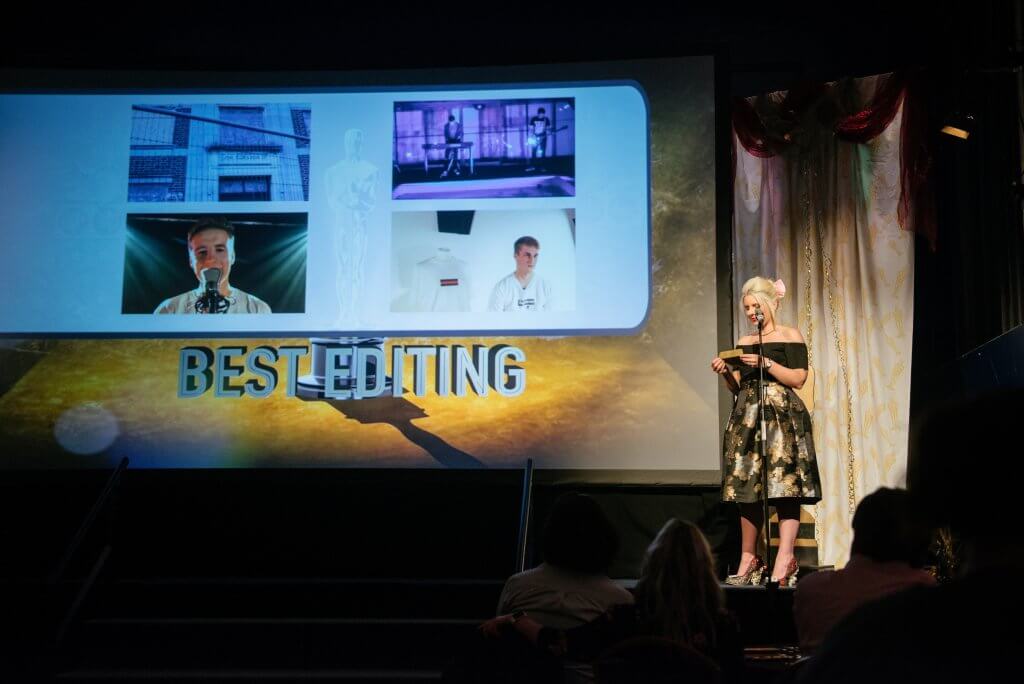 Other noteworthy performances include Best Music Video winners Connor Fernandes and Edward Smellie (Year 11) who produced an outstanding and ambitious interpretation of Coldplay’s Speed of Sound, and Chantelle Creighton (Year 12) who won our inaugural Best Newcomer award. This award recognises a Year 12 student who had excelled across production disciplines, including video blogging and magazine production, putting themselves in an excellent position to approach their A Level coursework in Year 13.

These are just a few of the stand-out productions and winners of the evening and the full list of champions can be seen below. It is fair to say that the assembled audience were stunned by the quality and sophistication of the work on show, particularly considering the young age of some of the nominees. This sentiment was echoed by our Guest of Honour and Old Ratcliffian, Miles Latham, Managing Partner of Affixius Films. You can read his full speech below, but, in short, it was wonderful to hear how Ratcliffe College, and the creative opportunities it offers, had inspired him in his own career and also to hear how he was ‘staggered’ by the professionalism of the work on show. This is a ringing endorsement of our students’ talent, drive and creativity, which truly is second to none. 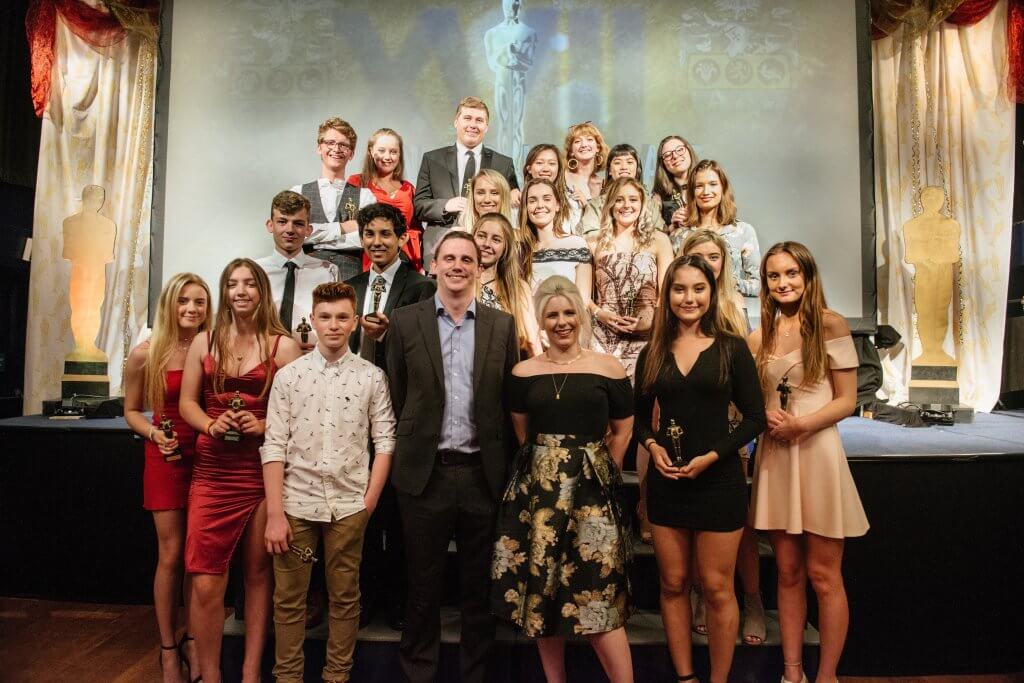 Mrs Bennett, Guest of Honour Miles Latham, and the assembled ‘A Night at the Oscars’ winners

A Speech from Miles Latham, Managing Partner of Affixius Films, prior to presenting the final award to winners ofProduction Most Likely to Succeed in a Real Media Context:

Well, this is a little odd.  I still like to pretend I was a student at Ratcliffe relatively recently, but in fact it was fifteen years ago that I left the endearingly dangerous “Sixth Form Centre” which, while my seat was still warm, they knocked down and built a swanky new one.  Cheers.

In that time we’ve seen the world change fundamentally and technology transform the industry we’re here to celebrate.  Still, it’s good to know some things stay the same, like the abject inevitability of England going out in the Quarter Finals of a World Cup.  Now, I don’t think I’ve ever been anything “of honour” – I wasn’t even the most important person on my own stag do – and so I’d very much like to thank Mrs. Bennett for inviting me along tonight.

Put simply, my career began where you guys and girls are sat now.  When I was 14 I fell in love with what used to be called the Ratcliffe College Film Club.  It was a subject and an activity that gave me the space to think creatively for the first time in my school life.  Initially, for me, it was editing – and as horrendously cheesy as this sounds, the first time I cut two shots together that started to tell a story was a genuine thrill; one that I’m sure a lot of the editors in this room will know well.

Alongside my (now) Business Partner, who doesn’t think enough of you to be here tonight(!), we set up Affixxius – a word so daft it could only be made up by two sixteen year olds and have a typo in it.  But our intention was clear – to do things on film that excited our creativity – and ideally get paid for it.  We made our first commercial film at the age of 16 for the grand total of £50.  The delivery note when we dropped off the Master was signed “Mickey Mouse” by our client.  But thankfully it takes more than ridicule to stop young people who want to achieve.

When I left Ratcliffe I’d been offered – I presume down to a horrendous administrative error – a place at a fairly prestigious university, but that didn’t stop us.  We ran Affixxius ‘part time’ for the next three years until – again presumably due to another administrative howler – I was allowed to graduate.  The passion that had been instilled in me, that started here, wasn’t going away.

The rest of our early history is pretty dull and involves a lot of filming in damp fields and living in Premier Inns, but today Affixxius Films is one of the most respected commercial film agencies in the country and I have recently been appointed a Lead Board Member of EVCOM, representing our industry across the UK.  We produce a huge variety of film, from broadcast TV adverts to above-the-line digital brand campaigns, for a vast range of commercial clients as well as producing films all over the world for schools, colleges and universities.  Put simply, Affixxius is a hobby that’s got out of hand, but it’s a hobby that makes for the best job in the world.  The twenty-one of us in the Affixxius team all share the same passion to do exactly what Ratcliffe instilled in me – how can we make this better?  How could this do something new?  How can we produce film that makes a difference?

So, in truth, a little bit of Ratcliffe College is sat in every one of the awards in our reception area, in every one of the new releases we send to clients and in every one of the careers that Affixxius has helped to start or move forward.  The most ridiculous thing about all this is that I wasn’t even a particularly good filmmaker – certainly nowhere near as good as those who’ve produced the work we’ve celebrated tonight – and yet here I stand.  For every one of you that’s got that ‘itch’ to make great things happen on film I promise you – it’s a career well worth fighting for, but you’ll have to fight hard.

As someone who has built my career entirely in the world of film-making, it gives me huge optimism and great excitement that the most prestigious and coveted award of the night is called, “Production Most Likely to Succeed in a Real Media Context.”  The commercial film industry is one of the fastest growing in the creative sector, but ultimately film is there to do a job with artistic flair, not just to satisfy creative vanity.  The productions of which I’m most proud from my career are those that have made a difference – raised awareness, changed opinions and, in some cases, helped to save lives.  That this award even exists, let alone is the ‘prix d’or’ of tonight, is a fantastic testament to how well grounded and well-thought-through the Ratcliffe College Media Department must be. 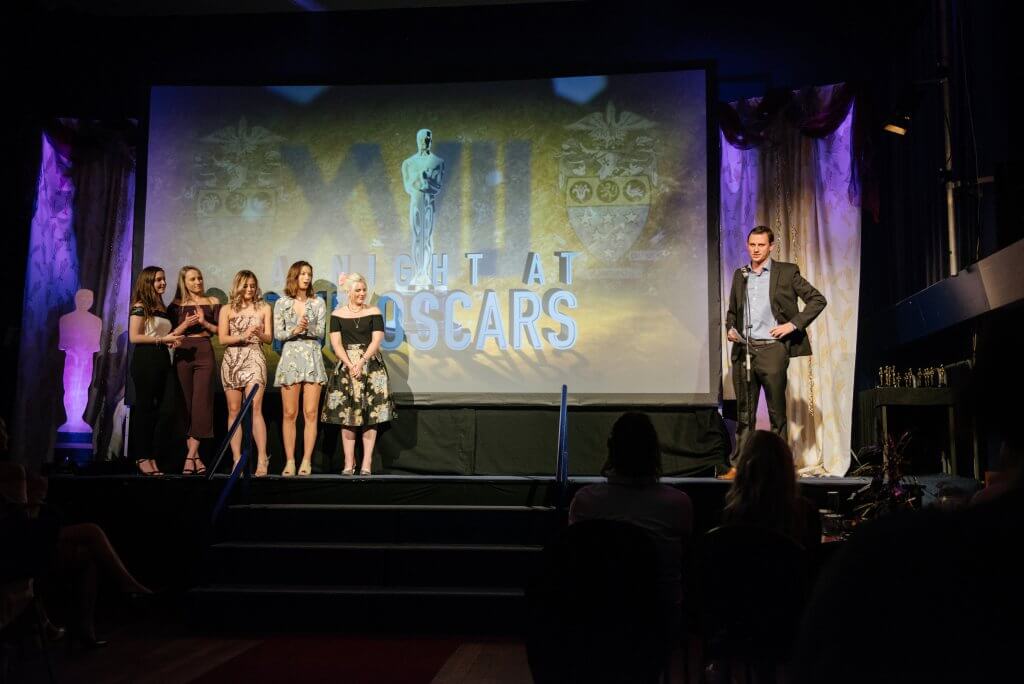 Mr Miles Latham presenting the final award of the evening.

Being completely honest, recruitment is probably the hardest and least fun bit of my job – mainly because I’m often presented with work that doesn’t show firm technique or an understanding of what it’s there to do.  Don’t get me wrong, I enjoy being mean to graduates as much as the next guy, but for the UK to continue to produce world-leading film we need world-leading talent.  As an employer, the work I’ve seen on this shortlist, and especially our winner, gives me renewed hope for the future of that talent.  It’s great to see young people ‘having a go’ on a creative level – if you’re not going to do it when you’re 16, 17 or 18 then when are you going to do it?

First and foremost, our winner tonight knows what it is as a piece of film and has a very clear, well-written structure that makes it interesting to grapple with but easy to watch – not an easily achieved balance.  The group in question understand their genre, both in terms of the techniques that make it but also in the inherent ‘responsibility’ this particular genre has to present balanced arguments.  It has a very sensitive use of soundtrack and a superbly paced edit that feels mature beyond the age of those who have made it.

More than anything, however, I admire how this piece maintains an informed dignity.  Topics that are personal and thought-provoking are the soap-box for the filmmaker, but the skill of the filmmaker is to present ideas in a balanced way.  It would have been so easy for this piece to be preachy, smug, self-satisfied or out to blame ‘the man’, but it doesn’t.  The exposition (I can actually use technical language here, it’s great!) is clear and the lasting ‘read’ for the audience stays with you.  For a piece of contemporary documentary, you can’t ask for much more.