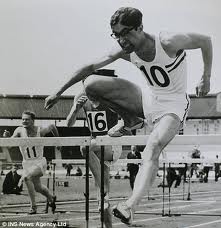 Peter Hildreth was born in Bedford in 1928 and spent his formative years in India, where his father worked.  In 1945, he came to Ratcliffe and soon established himself as a gifted athlete.

His sporting breakthrough came at the age of 22, when he competed in the 1950 European Athletics Championships at Brussels’ Heysel Stadium.

His determination brought him great success as a hurdler, winning countless national and international races in the 1950s.  He equaled the British record for the 110 metre hurdles (set by his hero, Donald Finlay), with a time of 14.3 seconds, on five occasions.  He represented Britain in the Olympics three times – in Helsinki in 1952, Melbourne in 1956 and Rome in 1960.

You can read more about Peter’s life on our Old Ratcliffian’s website by clicking here.