Ratcliffe College has a proud history of supporting good causes within the local community and amidst the recent Covid 19 crisis one dedicated Year 13 student, James Howling, has been supporting the incredible work of the heroic NHS workers by making essential PPE equipment at home on his own laser printer, using skills acquired at school. 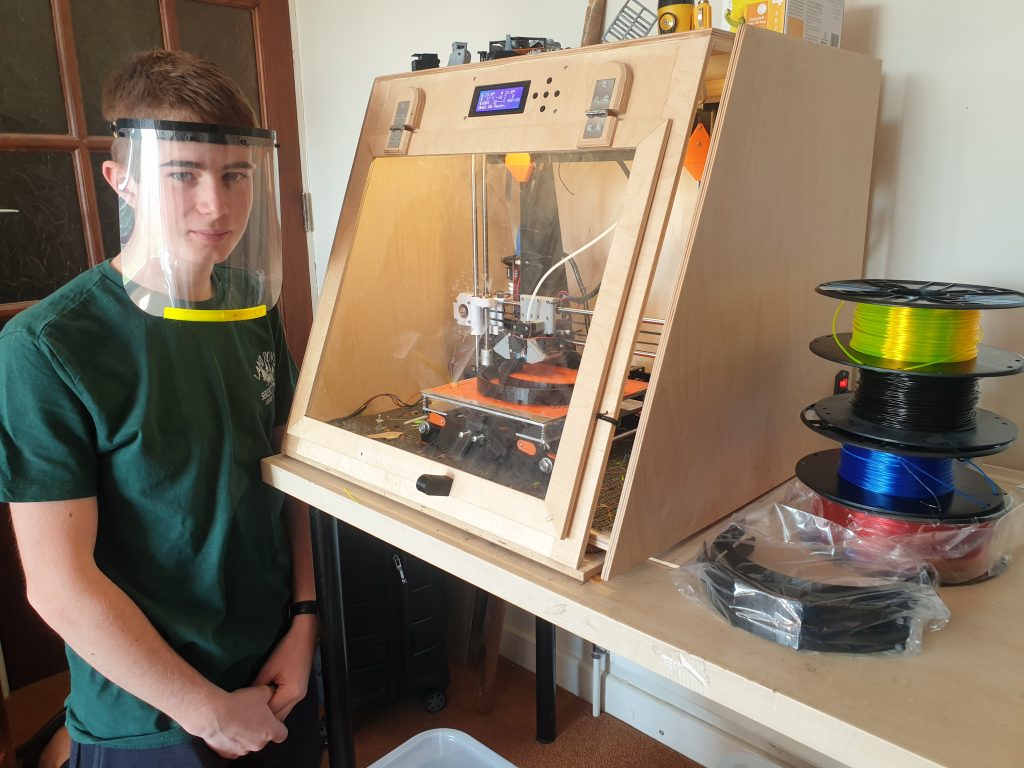 James has been producing much-needed face masks or shields as part of a group called 3D Crowd, which has approximately 5000 members. The group currently has orders for 334,000 shields of which they expect to fulfil 80,000 orders this week (over the weekend approximately 17,000 shields have been printed). The shields are sent to a centre in Sheffield for assembly with the visor and then distributed to hospitals or care homes. The shields can also be distributed locally by individual manufacturers like James, if desired.

James has produced around 50 shields so far with most going to Sheffield for re-distribution throughout the country, whilst some are going locally to care homes and front line workers in the Leicester community such as first responders and district nurses.

This project is a real collaboration effort. James has been working closely with his Father’s contacts at the Rotary Club of Melton Mowbray who are showing their support by funding the filament for his 3D printer.  Ratcliffe College will also be loaning their school printer which will allow James to use his own printer (which is faster but less accurate) for the main headbands and the school printer for the bottom clips which need to be very accurate.

James said: “I have also modified an online design of 3D printed “ear protector” to allow fast laser cutting from ice cream containers.  There is a big demand for these as workers are wearing masks for much longer periods than they would do normally and are finding their ears get sore from the elastic; these ear protectors allow the elastic to attach behind the head, taking the pressure off the ears.”

Ratcliffe College Headmaster, Mr Jon Reddin added: “The School community is extremely proud of the initiative that James has shown in this project, together with his compassion to help others at this difficult time.”

Mr Higham (Head of Mathematics) and Mr Seth (Head of Design and Technology) are making plans to increase production within the College in conjunction with James. Production will begin on Thursday.

“We have just had our 250th face shield collected by a nurse from the Queen’s Medical Centre in Nottingham as part of a batch of 60, others have gone to care homes and community nurses in the Melton Mowbray area.

Thanks to the loan of the school machine, the production has continued at a higher rate: James has also redrawn the files so that they stack and can be printed overnight, he has resurrected his old printer and has also purchased another so we now have three on the go!

We have started a JustGiving page – the response has been phenomenal and this, coupled with a donation from the Parents’ Association has allowed us to purchase another 25 rolls of filament and 1500 acetates, as well as another 3 printers, which should be here by the weekend.

We are now managing to produce 85 shields per day – but are learning fast and the new printers, coupled with tweaks to the files, should allow us to reach 300 per day by next week!” 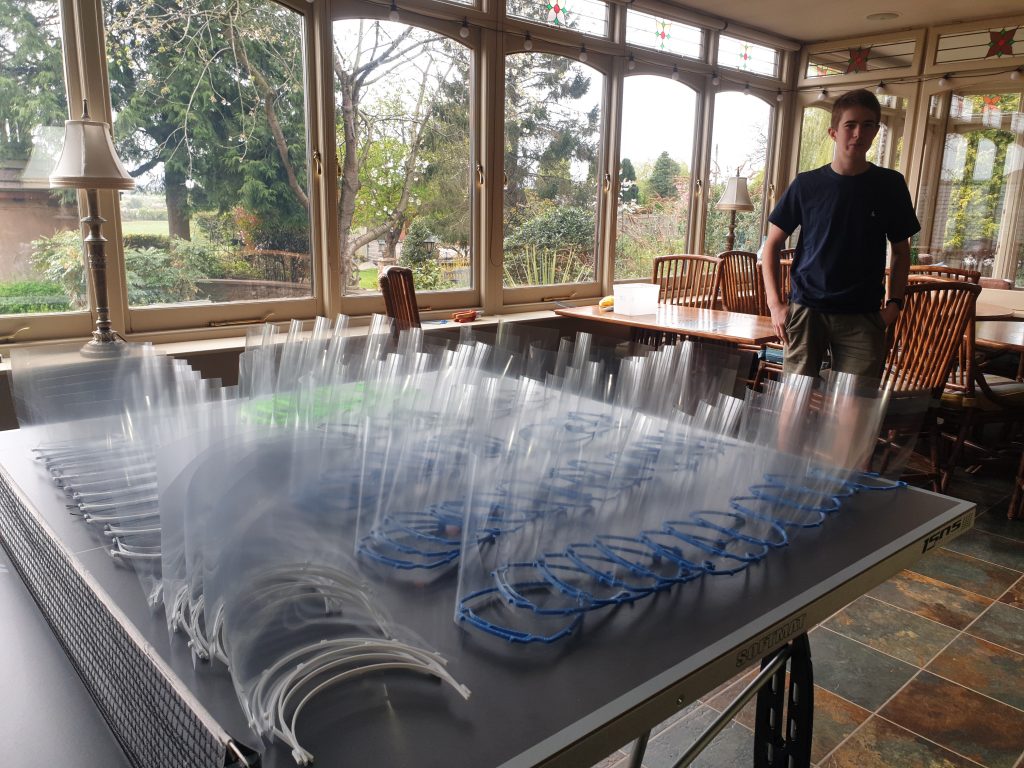 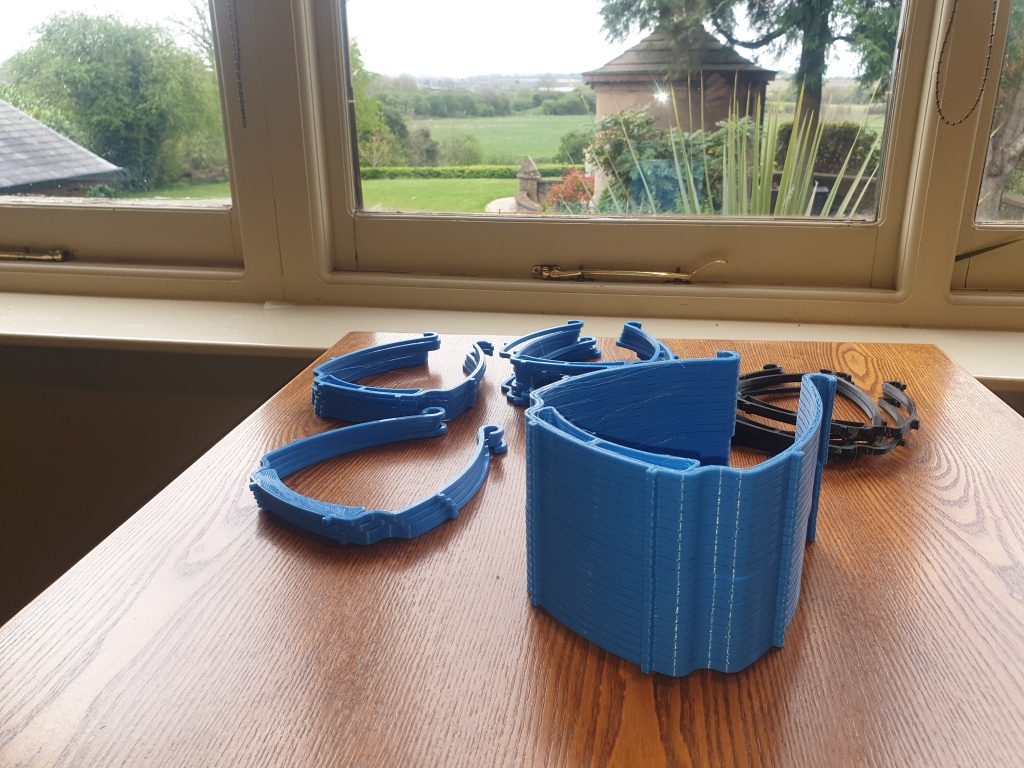