Parliamentary Debate at The Palace of Westminster - Ratcliffe College

Parliamentary Debate at The Palace of Westminster

Easter blessings came early for 13 Ratcliffe College students who celebrated the beginning of their Easter holiday with a trip to the Palace of Westminster and an audience with Members of Parliament.

At 2pm sharp, the Great Clock of Westminster struck the iconic Big Ben welcoming distant members of the family home.  A metaphorical great uncle to Ratcliffe legacies, Augustus Pugin, a Catholic,  designed Ratcliffe College and the Palace along with Charles Barry.  His creation sparked a day of spirited conversation and confidence to explore world leadership. Pugin’s devotion to the Gothic is renowned in each building and timeless in appeal.

The day was one of surprise for the thirteen Ratcliffians ranging in age form 14-19.  All members of the Debating and Public Speaking Group and experienced political style debate performers and public speakers.

According to Mr Benjamin, Head of the Group: ‘Mr Reddin put this trip together and it was important to bring the talent to see the talent.  Our Sixth Formers are confident, and so are the young men and women from the lower School.  It was great to see them debate with a member of Parliament.’

The day revealed many surprises particularly the House of Commons and the House of Lords chambers.  The House of Commons, cloaked in green, accommodates just 427 of the 650 elected members of Parliament, yet the MP’s sit in the aisles and stand in all available spaces creating the incendiary atmosphere the public enjoys. 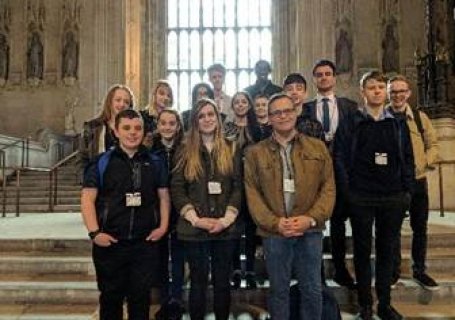 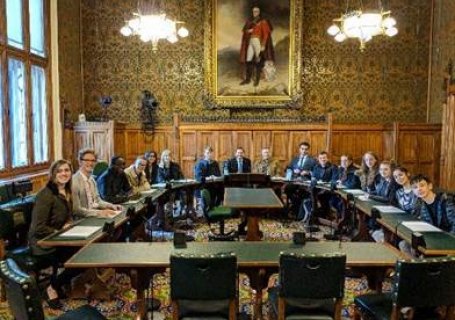 The Group toured the Commons, Lords chambers and historic Westminster Hall, which featured incalculable scale, and was home to jousting and the trials of Guy Fawkes (1606) and King Charles I (1649). The hammerbeam roof dates from 1399 and has been described as ‘the greatest creation of medieval timber architecture.’

On this day, Prime Minister Theresa May called an emergency House of Commons address to discuss the ‘red book.’  This surreptitious gathering surprised all as debate viewing seats were closed.  May was responding to British passport manufacturing moving to Europe, not favourable for Brexit leave proponents, of which the Prime Minister is the champion.

Opportunity presented itself to the fellowship being invited to one of the 1,100 rooms used for committee meetings.  The group traversed down a very long and private corridor, a pin prick of space, in the nearly three miles of the Palace corridors.  In a smart but sensible meeting room, decorated with volumes of hanging microphones- ‘all discussions are recorded, here,’ shared a legislative aide-  we set ourselves to debate.

We were soon joined by Mr Alberto Costa, a four year Member of Parliament from South Leicestershire.  Dressed in blue pin stripe and immaculate bearing down to the shine of his dark brogues, Mr Costa assumed the chair and began by offering a fluent governmental structure discourse.

Ratcliffe’s debating group quickly redirected the honourable gentleman to the ‘issues of the day.’  A good sport, Mr Costa invited the discourse which rumbled and tumbled over issues such as the blue v red passport; hate speech v free speech; party voting mandates; term limits; and the power of constituents.

Humorous and pointed, the discussion swept up the imaginations of the student fellowship with energy levels so fully engaged that mumblings could be discerned about Speaker Bercow’s availability to moderate.

‘That was fun, and I believe we were persuasive today,’ noted Year 12’s Matthew Garcia

Augustus Pugin would have proudly agreed.