Ratcliffe travelled to Bedford Modern School for their U18 England Hockey Plate match and lost 4 – 2. Ratcliffe were not at their best and found themselves 1 – 0 down at half-time and then 2 – 0 down shortly afterwards. However, this seemed to wake Ratcliffe up and they fought back hard to 2 – 2 with goals from Mia Atkinson and Jenna Pole. From this point onwards Ratcliffe looked the more likely winners. Unfortunately, two very poor decisions from the umpires cost us the game and allowed Bedford to win the match. Player of the Match was Mia Atkinson.

The 2nd team beat Nottingham High School 1 – 0. Although there weren’t many chances in the match, the opposition goal keeper deserves credit for keeping Ratcliffe at bay. Ratcliffe’s goal scorer was Sarah Astill who finished an excellent passing move. Holly Vinall was Player of the Match.

The 3rd team beat Rugby School 4 – 0. The girls maintained possession well with a strong press and good passing throughout, which paid off when they found Captain Ellie Hollinshead WITH time and space for a clean shot in to the bottom corner. In the second half, Ratcliffe continued to press and put a lot of pressure on the Rugby defence, which meant Emma Turner soon scored and Dalila Watson managed to score two further goals, one of which was an excellent top corner finish. Coaches Player of the Match was Becky Lindley.

The girls beat Nottingham High School 1 – 0 in a game they dominated. Plenty of chances were created and they were unfortunate not to score more goals.   Jess Elton, attacking down the right, had a great game and Freya Smith secured the short corner, which Rachel Astill converted. The girls showed great resilience and were determined to the end, resulting in an excellent 1 –0 win. Players’ Player of Match was Matilda Creegan and Coaches’ Player of the Match was Brooke England. 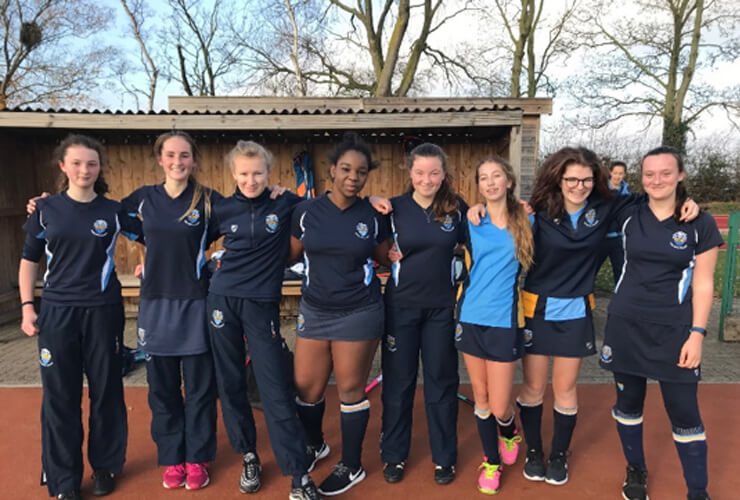 The U14’s played in the Zone Rounds of the England Hockey U14 Schools Competition on Thursday night, Losing to Wellingborough College 3 – 0 and Worksop College 2 – 0. The girls played some fantastic hockey against two very strong teams. The girls’ commitment and dedication on the pitch was excellent and they should be proud with the performances. Player of the match for both games was Annie Jarvis.

The U14A team won 2 – 1 against Nottingham High School on Saturday. It was another strong team performance. Goal scorers were Victoria Wheatley and Annie Jarvis. Player of the Match goes to Chelsea Makandeni and Coaches’ Player goes to Amelia Tebbutt.

The U13s came up against Nottingham High School for the second time this season and again came away victors, this time with a 5 – 1 win. Ratcliffe started very well, scoring their first goal within 30 seconds of the start and added to their lead a few minutes later, making it 2 – 0 at half-time. Although Nottingham managed to get a goal back, Ratcliffe continued to dominate in the second half and further added to their score after a great hat-trick from Zoe Howling. Special mention goes to Maddie Whalley for top defending and some great balls through to the midfield. Player of the Match goes to Daisy Reddin for some brilliant runs down the right-hand side, resulting in some well worked goals. Well done girls!

The U12A team enjoyed a well-contested match against Nottingham High School. The girls got off to a flying start with an early goal from Sophie Bardsley, and they continued to play some fantastic attacking hockey for the rest of the first half. In the second half Alice Bower and Millie Lake were invaluable in defence and hardly let Nottingham into the D. Annabell Hull had more than one chance, but the opposition keeper wasn’t letting anything past. The final score was 1 – 0 to Ratcliffe. Player of the Match was Millie Lake.

The U12B’s had a thumping 9 – 1 victory against Nottingham High School. Ratcliffe started strongly opening the scoring within the first few minutes. Nottingham High proved very stubborn in defence, however, and made it hard for Ratcliffe to create clear shooting opportunities. Never the less, some brilliant passing and team-work going forward meant Ratcliffe finished the first half 5 – 0 up thanks to a hat-trick of goals from Isabella Westwood, alongside a further two goals from Holly McNeeney.

Ratcliffe continued to dominate possession throughout the second half, scoring a further three goals to go 8 – 0 up before Nottingham High replied with a counter-attack, scoring a goal of their own. Holly McNeeney scored a goal with the last attack of the game to ensure Ratcliffe finished the fixture as 9 – 1 victors. There were four goals each for Holly McNeeney and Isabella Westwood, with a further goal from debutant Arabella Wilson.  Players’ Player goes to Isabella Westwood and Coaches’ Player to Arabella Wilson. All of the girls played fantastic and should be extremely proud of their performance!

The U13A netball team won 21 – 1 in the quarter final of the Team Leicester against Brooke Vale School. The girls played some fantastic netball and moved the ball up the court with great skill. A great performance from all. Player of the Match was Sophie Walker.

The U15A team won 37 – 4 in the quarter final of the Team Leicester schools’ competition against Brooke Vale School. Annie Rose Reddin and Rachel Astill produced some fantastic movement in the shooting circle and almost every opportunity was converted into a goal. In defence, Maddi Bryant and Millie Chapman ensured that the ball rarely entered their circle and created a large number of turnovers. A fantastic result. Well done to all the girls involved. Player of the Match was awarded to Elise Atkinson

Unfortunately, Ratcliffe once again started the match on the back foot, conceding a very early try. After this the defence was outstanding and King Henry’s did not score again until Ratcliffe lost a player for a yellow card and Ratcliffe were 12 – 3 down at half-time. In the second half, Ratcliffe played some excellent rugby and won the half 7 – 3 but unfortunately this was not enough to win the game with the final score, 15 – 7 to King Henry’s. There were some great performances from Connor Foster and try scorer Alex Purcell, but Man of the Match goes to Callum Allsopp for his excellent all-round performance.

With several players having to play out of position it was a tough game for the 2nd XV. A try in the first 5 minutes from Harry Culpin got us off to a good start but King Henry’s organisation wore us down and the opposition started to score on a regular basis. Men of the Match were Toby Blackmore and Jamie Gilbertson who turned their hand to forward duties brilliantly. Other good performers came from Matt Elton, Harry Culpin and Harry Cusack. Final score was 43 – 5 to King Henry.

The U15s got their third win in a row, midweek against Quinton House. The first 20 minutes in particular the team displayed some great organisation, with creative running lines and some good tries scored. They did not quite maintain their momentum but still managed to run out 45 – 6 winners. Dan McGunnigle was Man of the Match on his return to the team.

On Saturday, against King Henry, sadly they played well below their ability. Despite this they were determined and stuck to their task, but could not quite overturn the half-time deficit, eventually losing 17 – 14. Ollie Howard played well in a tight game.

The U15B rugby team comprehensively won 53 – 0 against King Henry’s. A large and physical Ratcliffe team, ran in nine tries at regular intervals throughout the game. The forwards dominated possession, with Jacob McCahill and Nigel Denham having excellent games. Henry Winterson and Harvey Seymour also made some strong runs, regularly getting over the gain line. Harran Mokha also impressed when he came off the bench to make his school debut.  Ratcliffe Try scorers were: Jacob McCahill (3), Joe McGuire, Henry Winterson, Ben Ashford, Temi Abiodum and Truman Leung.  Man of the Match: Jacob McCahill.

Ratcliffe lost 29 – 10 versus King Henry in a highly entertaining game. Ratcliffe showed the greater enterprise of the two teams and were let down by handling errors in the final passes.  Phelton Tandoh scored a brilliant try off a set move from the lineout, whilst the other try scorer, Tyler Black, profited from a period of pressure on the King Henry line.  The pack played very well with Marcus Wigwe providing some good ‘go forward’ ball in the second half.  The whole team played well and with good discipline throughout, ably led by the Captain Tyler Black – the whole team deserving of the Man-of-the-Match award.

The U13s came up against a physical and well organised King Henry’s team. Ratcliffe struggled in the first half to match King Henry’s power but the team played much better in the second half putting in some excellent tackles and working hard at the breakdown to turn over lots of the opposition’s possession. Man of the Match goes to Vincent McKeeferey for his outstanding tackling and Fin Spencer for his excellent all round game. Final score was 35 – 0 to King Henry’s.

Ratcliffe lost 25 – 0 to a strong King Henry’s side. Despite some defensive slip ups in the first half, Ratcliffe battled back to dominate possession in the second half.  Liam Hardy-Smith put in some last ditch try saving tackles to stop King Henry’s in their tracks. Max Diaz was strong in the tackle and carried the ball extremely well. Man of the Match was Robbie Clark for his committed running and hard tackling throughout.

It was a tough day at the office for the U12s, as they came unstuck against a physical Henry’s side. Right from the kick off Henry’s used their big ball carriers to great effect, and Ratcliffe struggled to find answers. In spite of Henry’s obvious momentum in the game, Harrison Rutherford made hit after hit, knocking back Henry’s runners when others couldn’t, and Fin Martin continues to grow in to the fly half role, managing to stay composed in a losing side. Lots of work on the contact area in the coming week as we come in the final couple of games of the season. Final score was 50 – 0 to King Henry’s.

The U18 basketball team played on Wednesday 14th November away at Rawlins Academy. Playing for the first time together they put in an excellent performance against a very strong and competitive Rawlins team, made up of several National League players. Ratcliffe started off strongly, but once Rawlins began to get a bit more organised, they began putting the pressure on Ratcliffe and began to pull ahead and dominated the second quarter of the game.  At half-time we were down by nearly 20 points but then managed to put together a really strong third quarter to claw some of those points back. The fourth quarter was a fairly even one with both teams sharing the points. There were outstanding performances by team Captain Lewis Cox who finished with 30 pts, Thomas Leite with 10pts with the rest of the points shared amongst the team. Overall, a pleasing start to the season even though it ended in a 65 – 55 loss. We look forward to another tough game on Thursday 22nd against an equally strong Bosworth Academy Team.