Midweek, a mixed U15 A/B squad took on Our Ladies Convent, winning 23 – 8. The girls took control of the game from the start and Dalila Watson and Daniella Hendry made some fantastic interceptions and tips in the defending circle whilst accurate shooting from India Clark and Eleanor Shaw secured the win. Samantha Diaz was Player of the Match. On Saturday they faced an exceptionally strong side from Northampton High School. Despite the freezing weather conditions, the girls held their own in the first quarter with some great attacking play by Aimee Cleminson. However, throughout the rest of the game the opposition rarely missed a shot and had some key players that managed to turn over possession. The girls fought hard until the end but unfortunately lost 56 – 11. Player of the Match was Eleanor Shaw.

In their midweek game against the Convent, a mixed U14A/B team started strong, with the ball flowing nicely through the court. Strong defensive play from Elise Atkinson, Maddie Bryant and Amy Mason forced errors early, allowing Ratcliffe to gain the lead. The Convent tried to get into the game, however, it was clear that Ratcliffe were in control, with good movement for the ball from Ella McNeeney and Annie Bridgewood. The girls remained in control of the game, and the whole team worked effectively; turning over the ball and carefully working it to the shooters, where Player of the Match, Emily Curnick, had no problem sinking her shots. Overall, a great result for Ratcliffe securing a 33 – 1 win. On Saturday, the girls started strongly against Northampton, focusing on their movement through the court and their decision making, Northampton portrayed equally skilled netball, finally winning 24 – 18. The defence of Millie Chapman, Maddie Bryant and Ella McNeeney, worked hard to turn the ball over; while the attack ensured these were converted. Despite being behind, the girls fought back in the second half with Amy Mason and Annie Bridgewood presenting a steady front court attack to shooters Annie-Rose Reddin and Rachel Astill. Ratcliffe fought hard and finished impressively, winning the last quarter. Player of the Match was Annie-Rose.

The U14B team beat a good Northampton side 5 – 3, with some excellent play throughout the court and solid defence from Daata Apiafi and Jessica Elton as well as an outstanding performance from Matilda Cregeen at wing defence. After initially going behind, the girls fought back to push for the win. Player of the Match goes to Daata.

The U13A team won one and lost one this week. The girls played some good attacking netball on Tuesday against Our Lady’s Convent. Controlling the game by slowing the pace down, enabling the team to win 9 – 4.  Player of the Match was Amelia Wells. On Saturday, they were up against strong opposition who didn’t miss once when they were in the circle. The girls battled hard and play some good netball, but couldn’t quite convert their chances.  Players of the Match go to Victoria Wheatley and Eleni Malhan.

The U13Bs had an excellent 15 – 2 win against Our Lady’s Convent. A number of excellent interceptions from the defensive trio of Shreya Patel, Fissy Abiodun and Amelia Tebbut saw the girls take an early 6 – 0 lead in the first half. A fantastic shooting display from Coral Keates and Issy Illsley-Ridge in the third quarter allowed the girls to build their lead to 13 – 1 moving into the final quarter. It was an excellent team performance with the girls playing some of their best netball. Congratulations to Issy Illsley-Ridge on Player of the Match. They lost 7 – 1 against a tough Northampton High School. After a slow start, they soon picked the tempo up with some fantastic interceptions from Amelia Haggis and Fissy Abiodun. Tilly Miles had a great impact on the game coming on at WA in the second quarter linking well with Coral Keates and Issy Illsley-Ridge. Congratulations to Shreya Mistry on being awarded Player of the Match.

The U12A team had a tough fixture against a strong Northampton High team. The girls went out hard, winning the first quarter. With Avani Gupta playing well at centre the game was neck and neck. The shooter paring of Sophie Walker and Katherine McCrindell worked exceptionally hard in the D against some strong defenders. However, after half time Northampton made the most of their possession and our injuries and pulled away to secure a 24 – 12 win.  The score should not dishearten the girls, as they played exceptionally well against a very strong team. Player of the Match was awarded to Avani Gupta.

The U12B team had a great game against Northampton High School, winning 14 – 4. Millie Woan made some fantastic interceptions, with Connie Colville and Player of the Match, Georgie Daynes working brilliantly together in the centre court. Sophie Shield and Sophie Packwood worked exceptionally hard together, shooting well whilst Romi White managed to slow down the opposition’s attacking play and defended brilliantly. The girls deserved their 12 – 4 win. Well done.

Congratulations to Rosie Dickerson who has swam brilliantly at the Nottinghamshire ASA County Championships. She won the award for best overall girl in her age category after winning 13 individual medals and 4 relay medals.

Congratulations to Mia Atkinson who will represent Leicestershire and Rutland at the English Schools Championships on Saturday 17th March in Leeds.

The 1st team hosed RGS High Wycombe on Thursday in the ISHC Cup and lost cruelly on penalty strokes. The game from start to finish was an open but close affair. Ratcliffe took the lead mid-way through the first half with an excellent finish from Jack Nightingale, however, by half-time RGS were level. It was the visitors who then took the lead in the second half before Alex Purcell finished from close range to level the game once more. Player of the Match Ben Dexter had an excellent game at the back preventing the opposition late on from grabbing a winner. At the full time whistle the sides could not be separated and the match finished 2 – 2. Unfortunately, Ratcliffe missed two out of their first four strokes, to lose the shootout 4 – 1.

The U15A’s travelled away to Sandbach on Tuesday for the second round of the Independent School’s Hockey Cup and pulled off a great 4 – 1 win. The boys came straight out of the blocks with a fantastic game tempo from the first whistle. After relentless pressure on the oppositions defence, Ratcliffe went one ahead with Finley Back scoring from a very well drilled short corner routine. A second goal came in very quick succession, as Stanly Chell managed to squeeze the ball over the line on the back post. The second half saw Sandbach claw a goal back, this only fuelled the boys desire to win and with that they again put continuous pressure on the opposition goal keeper, who had to make countless saves. Finally, a goal came, with a fantastic lob of the keeper by Finley Back. The fourth and final goal came from a great bit of skill from Tom Page who beat the keeper one on one. A tough decision for Player of the Match but Harry Cusack earned this accolade for his endless work rate up and down the left hand side of the field.

The U15A’s played their toughest game of their season so far against an organised Loughborough on Thursday, with the game finishing 0 – 0. The game was very physical with the ball going end to end. Both teams struggled to put the ball in the goal with, goalkeepers from both sides making good saves. Therefore, the 0 – 0 finished was a fair result. Man of the Match went to James Turner as a result of his incredible work rate and composure on the ball when in possession.

The U15B’s started slowly against Loughborough Grammer and ended up conceding the first goal, in a very close 2 – 2 encounter. Nevertheless, they did not let their heads drop and equalised soon after through a great individual goal from Samuel Seidu. They entered the second-half 2 – 1 down, but after half-time they continued to dominate and the match ended 2 – 2 as a result of a well worked team goal, although they were unlucky not to score a few more. Man of the Match goes to Captain Thomas Leite.

The U13s gave their best performance of the season beating Loughborough Grammar School 7 – 0. Loughborough were never allowed to settle into their game as Ratcliffe raced into a three goal lead. Loughborough came more into the game either side of half-time but the Ratcliffe defence and goalkeeper Jaidev Nanuwa in particular thwarted their efforts. Harry Gamble was Player of the Match with four goals. Sam Gray score two and Wilfred Milner completed the rout.

The U13/12Bs had a tough game against Loughborough, losing 2 – 0. Ratcliffe had a slow start in the first-half but soon found their pace and played extremely well in the second-half. Throughout the whole game Ratcliffe had some great attacking opportunities involving Matt Collyer, Jacob Butler and Hugo Illingworth and were very unlucky to not get on the scoreboard. Man of the Match went to Lucas Kariolis for his great work in defence and fantastic stick skills when on the ball.

Having concentrated on 11 a-side it was pleasing to see the U12s play their first 7 a-side game of the season with great character to beat Loughborough Grammar 4 – 0. The teams were evenly matched in skill and technique but Ratcliffe moved the ball with more pace and they also showed a much better work rate than the opposition. Men of the Match were Henry King who made some great saves in goal and Harry Cregeen who was excellent in attack, scoring a hat -trick and also creating numerous goal-scoring opportunities. 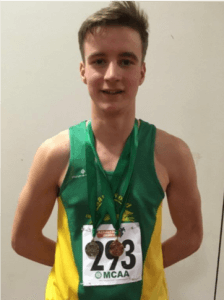 Congratulations to Harry Culpin, who Over half term competed in the Midland Counties Indoor Athletics Championships in Birmingham and won a silver medal in the U17 high jump and bronze in the U17 pole vault. 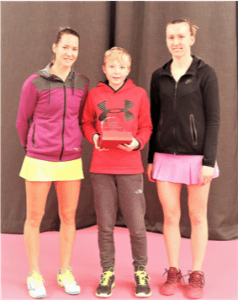 Congratulations to George Binnie who has been presented with an award by the Leicestershire LTA for Leicestershire’s Junior Tennis Team player of the year.