On Thursday, the 1st team travelled to Abbotsholme and put in a great performance winning 4 – 0. From the start they looked comfortable in their new formation and soon took the lead with a fine finish from Aimee Cleminson. They then doubled the lead just before half-time when Molly Edwards converted calmly from a penalty corner. Ratcliffe continued to dominate the second half and thoroughly deserved to score two more goals through Hattie Lawrie and Player of the Match Mia Atkinson, to complete the comprehensive win.

The 1st team travelled to Wisbech on Saturday and although they played well; creating lots of opportunities, unfortunately lost the match 4 – 1. The score line does not reflect the game as Ratcliffe had more opportunities in the circle than the opposition but could not finish off their chances. Wisbech were clinical in attack and midway through the second half, against the run of play they found themselves 3 – 0 up. Ratcliffe pushed forward even more and were rewarded when Danni Hendry was in the right place to finish from close range to pull one back. Unfortunately, as Ratcliffe pushed forwarded in search of more goals they were picked off again on the break. Player of the Match was Ihu Osuji.

The 2nd XI produced an outstanding performance against Wisbech winning 8 – 0. This was just rewards for their effort and hard work in training over the last few weeks. Leading 4 – 0 at half-time the girls added another four goals after the break. It could have been more if not for Wisbech’s goal keeper who made some excellent saves. Goal scorers were Dalila Watson, the energetic Mimi Khan with two and Player of the Match, Maddy Lindop.

The 3rd XI travelled to Oundle this weekend and began but Oundle playing well to take a 3 – 0 advantage into half-time. However, the girls continued to work hard and fought for every opportunity, but were unlucky not to take their chances with the game finishing 5 – 0. Eliie Hollinshead was Player of the Match.

On Thursday, the U15A team travelled to Loughborough High School and lost 3 – 0. The scored does not truly reflect the game, which was evenly matched; the difference being that Loughborough converted their chances on the break. Ratcliffe played some great hockey and let the ball do the work, moving it across the pitch well. Players’ Player of the Match was Amy Mason and Coaches’ player of the Match was Elise Atkinson.

On Saturday, we played our first home match of the season against Wisbech, which finished in a 1 –1 draw. Ratcliffe scored in the first minute of the game, courtesy of Annie Bridgwood. Throughout the game Ratcliffe had plenty of chances but just couldn’t quite convert them. Wisbech continued to press our high defence and we had to work hard to work the ball up the pitch, which we did well. In the second half, tired legs were

beginning to show and Wisbech scored on the break, leaving the final score 1 – 1. Players’ Player of the Match was Matilda Creegan and Coaches’ Player was Annie Rose Reddin.

On Saturday, the U15B team came up against Wisbech in a well matches game which they unfortunately lost 3 – 0. The girls started off hesitantly, and Wisbech were able to capitalise and take a 1 – 0 lead. The reaction by the team was positive and we were able to apply the pressure and keep them to their side of the pitch for the rest of the half. Going into the second half the girls started strongly, putting pressure on the Wisbech defence. Unfortunately, in the last five minutes Wisbech were able to score two more goals. Coaches’ Player of the Match goes to Amy Whitelaw, who played exceptionally well down the left side of the pitch, defending courageously and helping in attack.

On Thursday, it was another tough match for the U14 team against Loughborough High School. The girls played as a team and showed excellent team spirit, not giving up to the very end. Loughborough were a very strong side and our girls worked hard showing some excellent attacking play in parts and were unfortunate to not be rewarded with a goal. There were lots of things learnt and they were ready to move forward to Saturday’s fixture. Players’ Player goes to Captain Victoria Wheatley and Coaches’ Player goes to Amelia Wells for her hard work throughout the match.

After a tough fixture on Thursday the U14’s were eager to get their first win of the season. The girls showed great potential in the first half working together well, in both defence and attack, however, a last minute break by Wisbeach saw the girls go down by one at half-time. Ratcliffe came out positively in the second half and were rewarded with a goal by Amelia Tebbutt after some fantastic attacking play by the team. The girls battled to the end and should be very pleased with a 1 – 1 draw. Players’ Player goes to Chelsea Makandeni and Coaches’ Player to the whole team for their hard work and attitude.

The U13As had a long journey away to Wisbech for their second 11-a-side match of the term. The girls were on top for most of the first half and managed to enter half-time with a 1 – 0 lead, after a great strike from Avani Gupta from a short corner. They continued to dominate the game in the second half and Wisbech struggled to get the ball out of their half due to some brilliant pressing by the girls. Unfortunately, after a number of chances, the girls didn’t manage to grab a second goal and the game ended 1 – 0. Special mentions go to Maddie Whalley and Georgie Daynes and Player of the Match goes to Hollie Chapman. Well done girls.

There was another fantastic result for the Under 13B team against Wisbech, winning 2 –0. The girls put in maximal effort for the entire duration of the game and showed excellent attacking play throughout. Sophie Packwood scored both goals and Players’ Player was given to Millie Woan and Coaches Player was Gizella Perrins for creating some fantastic assists, as well as making some great runs.

The U12A team were keen to carry on their winning streak against Wisbech. Anabel Hull and Olivia Monkhouse were the goal scorers in a strong first half performance which led to a 4 – 0 lead going into the second half. Fran Best produced some great runs down the right wing and delivered some beautiful crosses for Annabelle Hull to get on the end of, which resulted in her scoring three more goals. Sophie Bardsley and Olivia Monkhouse managed to also sneak another goal each making the final score 9 – 0 to Ratcliffe. Player of the Match was Olivia Monkhouse.

The 1st team can take great heart from their performance, holding an impressive Mount St Mary’s team to a 24 – 7 lead at half-time with a great try from Connor Foster, converted by George Morgan Jones. In the second half, for the first 20 minutes, all the rugby was in the Mount St Mary’s half, with Ratcliffe having scoring opportunities but unfortunately not being able to take them. Mount then started to dominate the game with their physicality and superior power. Final score was 55 – 7 to Mount.

The 2nd team had their first loss of the season at home to Mount St Marys College. Ratcliffe started strongly with a well worked team try through try scorer, Harry Ainscough. In the end, Mount St Mary’s were too strong with big ball carriers dominating the play. Ratcliffe were competitive till the final whistle but the final score was 7 – 31. Man of the Match was Harry Cusack.

The U15s battled hard and the final score did not reflect the contest. The match was finely poised at 21 – 17 with less than ten minutes to go. Sadly, from then, Mount pulled away with some well taken tries. Xavier Henderson was Man of the Match for an excellent defensive display.

Ratcliffe proved to be the better drilled side running out 24 – 0 winners away at Mount St Mary’s. Led well by Captain Tyler Black, there were also notable performances from Pelton Tandoh, Joe Atkinson and Cameron Mulvihill. Try scorers were Harry Gamble, Phelton Tandoh, David Seidu and Wilf Milner – who had only just got on the pitch. A special mention for Samson Kwok, who started the day as a supporter but ended up playing in his first A team match and almost walking off with a Man of the Match

performance. During the second half, when Mount were pushing for a score, Tom Murray made two try saving tackles. Tom Murray is the official Man of the Match for his overall positional play and superb defensive work.

The U14B team played against Bablake midweek in a very entertaining game. Ratcliffe went into the lead twice before Bablake pulled ahead 12 – 10. This seemed to spark Ratcliffe into life as four more unanswered tries secured a 36 – 12 victory. Bankole Adegbonmire and Samson Kwok both played well and shared the Man of the Match award for the aggressive tackling and great running and try-scoring respectively.

The U13s never gave up against an impressive Mount St Mary’s side. The boys tackled their hearts out and it was only the Mount pace on the outside that was the real difference between the teams. Final Score was 50 – 15 to Mount. Try scorers were Rocco Lanza, Sam Pick and Harry Cregeen with an excellent individual effort. Man of the Match was Rocco Lanza for his powerful running all match.

In their best performance of the season, the U12s got the result they deserved against a big Mount St Mary’s side, winning 25 – 10. From the kick off Mount St Mary’s used their size well to take an early lead, with Ratcliffe trying to match the direct style of attack to no avail. Once Ratcliffe started to use the width, however, it was a different story; quick passing gave Kim O’Sullivan the space he needed to put Ratcliffe into the lead going in to half-time. Mount came back in the second half fighting, scoring out wide and putting the pressure back on the side. Having learned from last week’s mistakes, Ratcliffe regrouped, led by Xavier Illsley-Ridge and Michael Joy, and a couple of late tries put the game to bed. Man of the Match Kim O’Sullivan continues to impress, supported by strong performances from Lucas Barker and Michael Joy playing in a new position. Plenty to build on going into the next game against Oundle. 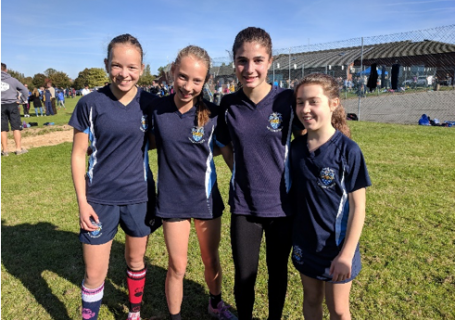 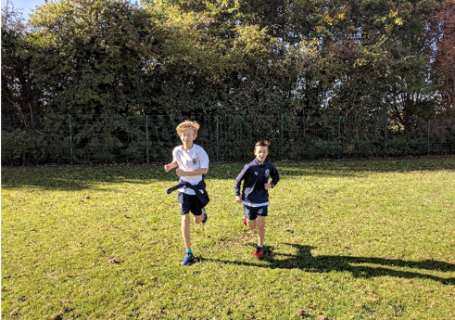 On Saturday, the 29th of September the second XC league race was held at Long Field Academy. Under blue skies, the RC Senior XC Team raced with Finlay Martin making his secondary schools XC debut and finishing an amazing third place. Sam Leake also had a

very impressive race finishing 16th. Our Junior Girls Team fielded a team with Eleanor Taylor racing for RC for the first time finishing a strong 23rd. Zoe Howling 30th, Sophie Shields 33rd and Caitlin Cummins 58th raced confidently in a field dominated by girls a year older. I was very impressed with the effort the Team displayed and look forward to the third league race on the 17th of November at Rutland Water.

Congratulations to Francesca Turner and Joss Phillips (Year 7) who both came 2nd representing the school in the pairs competition at the Fernie Hunter Trials, over a very challenging course.