On Thursday the 1st team travelled to Hill House and were unfortunate to lose 1 – 0 playing some of their best hockey so far this season. The game was played at a fast pace from the start as Ratcliife enjoyed a lot of the possession. Both teams had chances but could not score before half-time. The second half was a very even contest, just as Ratcliffe were starting to enjoy some sustained pressure against the opposition, Hill House managed to get a break away chance and scored with a very fortunate finish. This goal proved decisive which was a shame as Ratcliffe deserved something out of the game. Player of the Match was Nicole Spencer.

The 2nd XI had a busy week. On Tuesday they played in the County Tournament where they faced Leicester Grammar, Welbeck and Uppingham. Although they lost two and drew one, the losses were all by one goal. Samantha Diaz scored the Ratcliffe Goal on the day. Player of the Tournament was Mimi Khan. On Thursday, the girls faced Hill House at home. Without really ever getting out of first gear they won 2 – 0 with Sarah Astill getting both goals. Player of the Match was Holy Vinall.

On Friday, the U14A team competed in the County Tournament. The girls played two games, starting off with a 1 – 0 win against Wellend Park, with the goal coming from a well-worked short-corner routine that was finished off by Chelsea Makandeni. Following this, they unfortunately lost 4 – 1 to a strong Leicester Grammar team, Amelia Tebbutt was the goal scorer. The results from the tournament mean that Ratcliffe finished second out of the three teams. Player of the Tournament goes to the whole team for their fantastic effort throughout both games. Well done girls!

The U13A team had a fantastic win against Oundle, winning 3 – 2. The girls played very well in the first half scoring three early goals with a solo effort by Daisy Reddin, and calm finishes by Sophie Shield and Connie Colville.  However, Oundle did manage to peg one back just before the end of the half. In the second half the game was much closer, with Oundle trying to make a comeback. Ratcliffe persevered and played some good hockey to keep Oundle at bay. Special mention must go to Rosie Dickerson, who made her debut for the A team, in goal and played fantastically.  Maddie Whalley was Players’ Player of the Match and Daisy Reddin was Coaches’ Player of the Match.

The Under 13B team played Oundle School mid-week. The girls have shown huge improvements individually but, more importantly, as a team. Excellent attacking play was displayed by all, stretching the forwards high up the pitch and utilising all the space in the wide channels. All the girls hard work resulted in a 5 – 0 win. Players’ Player was given to Millie Woan for fantastic composure on the ball and for scoring three out of the five goals. Coach’s Player was awarded to Lola Hobbs-Brake for her excellent work in attack and defence and her constant uplifting praise to her peers. Another successful achievement for the Under 13B team, let’s keep this momentum going.

The U13C team played their first hockey match of the term against Oundle. They started off well, however, Oundle had some confident players who took advantage of our lack of match experience. The girls played well and should be proud of their first competitive match.  Player of the Match was Ava Kinch.

The 1st XV showed an excellent attitude and played some outstanding rugby to defeat Hill House 61 – 20. In the first half, Ratcliffe ran in some great tries through Abraham Boston, Alex Bown, Alex Purcell, Ollie Welch and Connor Foster to be 40 – 0 up at half-time. Hill House never gave up and the second half was a more even affair. Second half tries were run in by Archie Heaney, Connor Foster with his second, Matt Lindley and Aled King with George Morgan-Jones converting eight of the nine tries scored. Well done to the number of players who made their 1st XV debuts today and played so well. Matthew Lindley had a super game and was awarded Man of the Match, but credit must go to the whole team who coped so well with the long journey and the short warm up time.

On Monday the 1st October the U13A team played some exciting, attacking rugby versus Oundle to run out 40 – 20 winners. Tries were shared out amongst the team with the pick of them coming from Seb Welch and Man of the Match Harry Cregeen who scored with a superb solo effort.

Monday saw the annual ‘A’ and ‘B’ fixture between the U13s and Oundle Prep. The Bs started confidently, taking a commanding lead in the first few minutes, leaving Oundle stunned and a few tries behind. Finding their feet however, Oundle managed to stem Ratcliffe’s attacking play and in spite of the score line both teams went in to half-time looking well-matched. Oundle continued this pressure and raised the intensity in the second half, taking advantage of some complacent Ratcliffe tackling. Fortunately, the boys held on just enough to take the win, 9 tries to 8. Man of the Match goes to Robbie Clark for his work rate around the field. 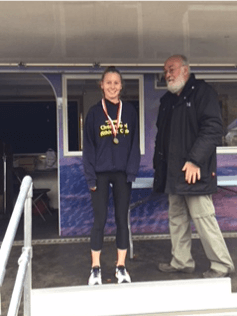 Congratulations to Mia Atkinson who ran the fastest time for the U17’s National road Relay Champions, picking up the gold medal and knocking 35 seconds off her personal best.