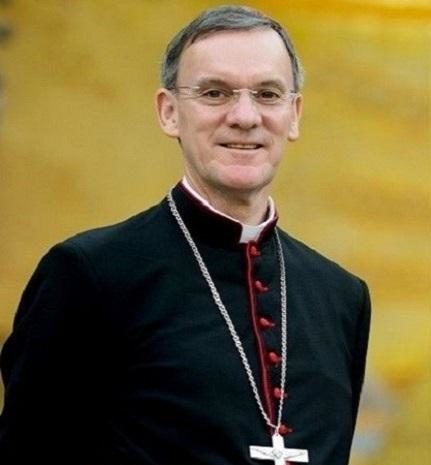 John Stanley Kenneth Arnold is the eleventh Roman Catholic Bishop of Salford.He was formerly an auxiliary bishop of the Roman Catholic Archdiocese of Westminster and held the titular see of Lindisfarne. He additionally serves as chairman of the Oxford and Cambridge Catholic Education Board.

After leaving Ratcliffe College, Bishop John graduated with a law degree in 1975 from Trinity College, Oxford and completed his legal qualification by being called to the Bar in the Middle Temple in 1976 after studies at the Council of Legal Education. He was ordained by Cardinal Basil Hume as a deacon in November 1982, and a priest in July 1983. In 2001 he was appointed as Chancellor and Vicar General by Cardinal Cormac Murphy-O’Connor. In November 2005 he became the Diocese’s first Moderator of the Curia shortly before his appointment as Auxiliary Bishop of Westminster in 2006. He currently serves as Bishop of Salford, a post he took up in 2014.